From Mezzocorona in Val d'Adige, the Valle di Non extends along the Noce river to Lake Santa Giustina near Cles, and continues along the Rio Novella to San Felice, which is already in the Province of Bolzano and is, unlike the rest of the valley, already inhabited by a German-speaking population.

The valley is the ideal starting point for excursions to the Brenta Dolomites, the Mendola, the Ortles, but also to Caldaro and Merano in South Tyrol and is also known for its lakes. Among them the artificial lake of Santa Giustina, the Lake of San Felice, and the Lake of Tovel, famous for the unique natural phenomenon in the world that colored it red at a particular time of the year following the flowering of an alga.

Closed to the north by the Maddalene mountain range, to the south-west by the Brenta Dolomites, to the east by the eastern subgroup of the Anauni mountains, to the south by the Paganella massif and the Andalo saddle, Val di Non is accessible from the Val di Sole ( Passo Tonale-Lombardia), from Val d'Adige (Mezzocorona), from the passes of Mendola (to Caldaro, Alto Adige) and Palade (to Merano). From Trento to Cles it is served by a railway line, from Caldaro to Passo della Mendola instead by a funicular.

The Val di Non is ideal for those who want to spend holidays away from stress and for those looking for a natural landscape with hills, woods and lakes spread over a plateau. The evocative villages of the valley, the castles and the sanctuaries characterize places that have remained intact from a natural point of view but also faithful to cultural traditions. 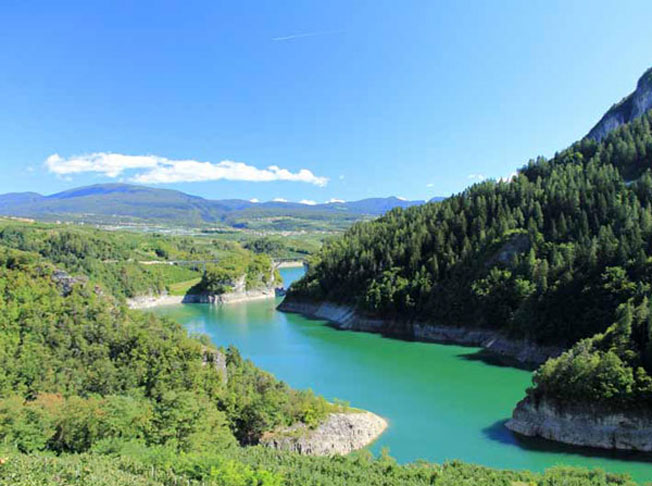 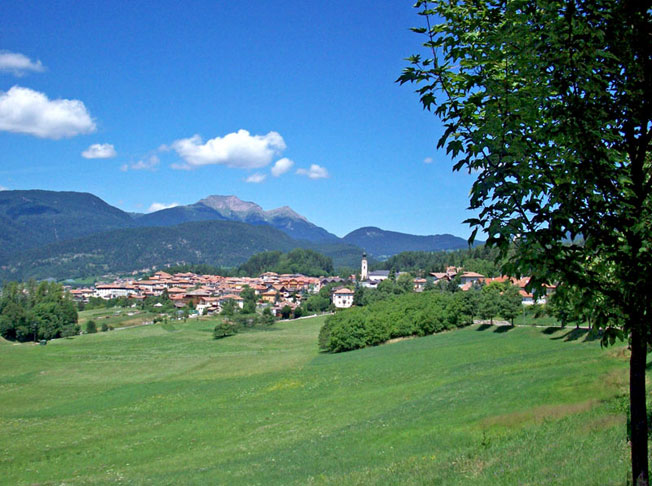 What to do in winter: Snowshoeing

Among the most well-known words in the world of the Val di Non there is certainly the word "snowshoe"!

And do you know what "snowshoes" are? They are simply snowshoes and it is no coincidence that the "Ciaspolada" was born in Val di Non, a mythical race made with these tools!

Everyone can "snowshoe" as the movement is the simple one of walking and what makes this activity unique and magical are undoubtedly the breathtaking landscapes around and the enchantment of the snow.

With the sun breaking the cold... snowshoeing will become your favorite activity!

Immersed in a suggestive alpine scenery, in the locality of "Palù", we find the two lakes of Coredo and Tavon. Here, in addition to spending real moments of relaxation and tranquility, it is also possible to practice sport fishing. The two lakes can be the starting point for excursions on foot to visit the Sanctuary of San Romedio, the Ancient Venetian Sawmill, or bicycle excursions.

No license is required to practice fishing; daily permits are issued. 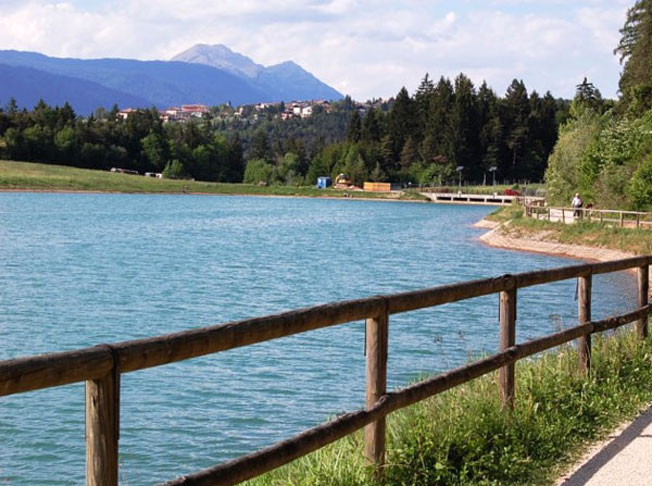 The Sanctuary of S. Romedio is also often remembered for the wildlife area adjacent to the entrance where two bears live in semi-liberty, the true mascot of all the children of the Val di Non (currently no specimens are hosted). Their presence in this place of worship is linked to the legend according to which Romedio, now old, would have walked towards the city determined to meet the Bishop of Trento, Vigilio.

Along the way his horse would have been torn to pieces by a bear, however Romedio did not give up and, having approached the beast, he would have miraculously managed to make it tame and ride it to Trento. 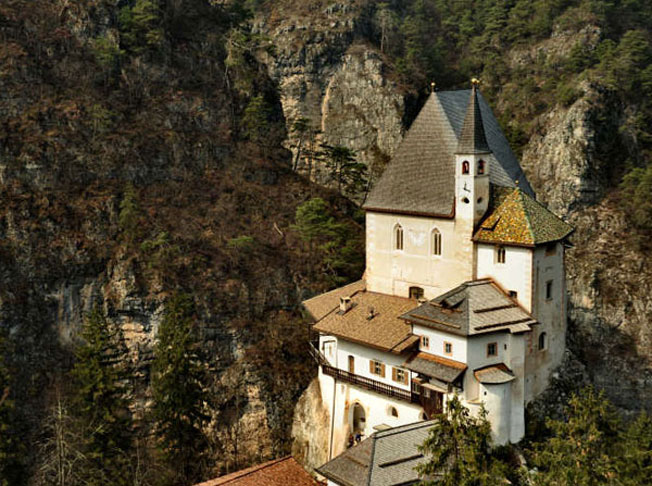 Castel Thun was built in the mid-thirteenth century and was the seat of the powerful Thun family, which owned other prestigious residences in the valleys of Non and Sole. The castle is located on top of a hill at 609 meters, near the town of Vigo di Ton in a beautiful panoramic position. 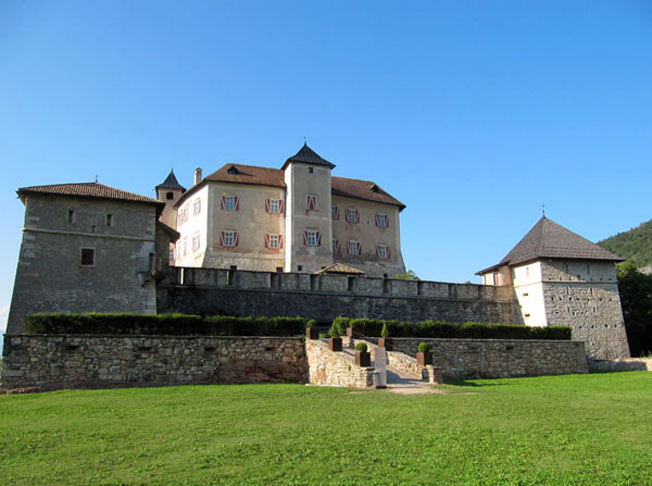 Viale dei Sogni is a quiet and romantic 2 km flat walk that connects the center with Lake Coredo and Lake Tavon, crossing a precious pine forest with a view of the valley.

The Viale dei Sogni is bordered by a narrow stream of water that accompanies the walker with its slight rustle, and along the route there are several benches that invite you to stop for meditation in the heart of a still available and discreet nature. The Viale dei Sogni ends right with a wide flat expanse in front of the scenery of Lake Coredo and just beyond Lake Tavon. 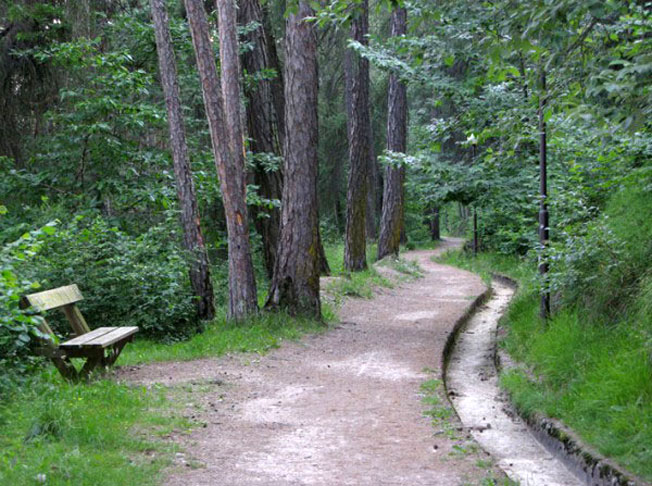 Location of the Guest House Dolce Sogno and map

We will pamper you to make you live a sweet dream!

The position of the Guest House Dolce Sogno dominates the entire Val di Non surrounded by the mountains of the Brenta Dolomites, the Maddalene group and the fantastic panorama of Lake Santa Giustina.

The building was classified as a climate house A, due to energy savings thanks to solar thermal and photovoltaic panels. The entire structure is equipped with automatic air change and sanitization to ensure total comfort for our guests.